Which countries received funding for mine action in the reporting period?

Print friendly
Which countries received funding for mine action in the reporting period?

A total of 38 states and three other areas received $627.3 million from 37 donors in 2017. A further $46 million, designated as “global” in the table below, was provided to institutions, NGOs, trust funds, and UN agencies without a designated recipient state or area.

As in previous years, a small number of countries received the majority of funding. The top five recipient states—Iraq, Syria, Colombia, Afghanistan, and Lao PDR—received 65% of all international support in 2017.

Iraq received the largest amount of funding (30% of all international support) from the largest number of donors. Eleven states and one area, or 29% of all recipients, had only one donor. 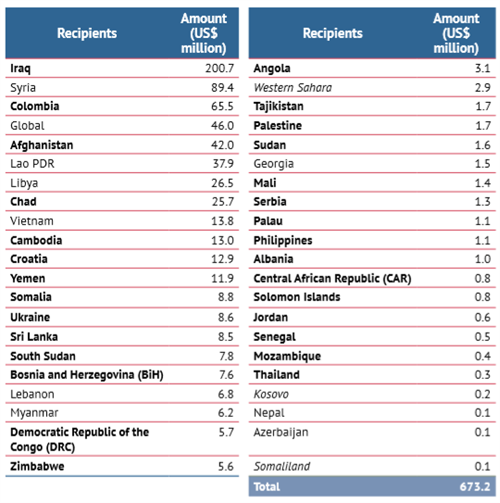 (Last updated based on Landmine Monitor 2018)

Back to Mine Action funding

Keep up to date with Monitor. Enter your email below.

Fill out my online form.