Which type of explosive devices cause the most casualties?

Print friendly
Which type of explosive devices cause the most casualties?

In 2017, landmines of all types caused at least 4,795 casualties—these were recorded as
being caused by factory-made antipersonnel mines (748), antivehicle mines (488), improvised
mines (2,716), and other unspecified mine types (843).

Unexploded submunitions caused 93 casualties and other ERW caused 2,038 casualties.
A total of 313 casualties were the result of mine/ERW items that were not disaggregated in
data.

Casualties recorded as caused by factory-made antipersonnel mines (thus, not including
improvised mines) were documented in 23 states and areas in 2017.

Casualties from improvised mines (not included among casualties recorded as from factory-made antipersonnel mines, antivehicle mines, or other unspecified types of mines) were identified in 18 states in 2017. Most improvised mine casualties in 2017 occurred in Afghanistan (1,093) and Syria (887). 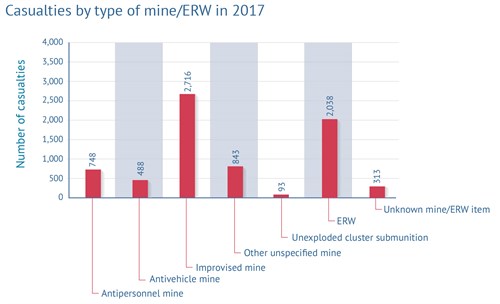 (Last updated based on Landmine Monitor 2018)

Keep up to date with Monitor. Enter your email below.

Fill out my online form.